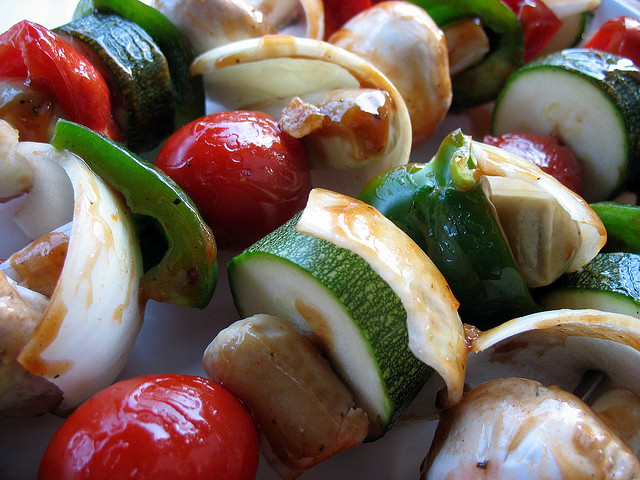 Depending on how they are prepared, grilled veggies can be succulent and tender, or unevenly charred and cooked. Avoid disappointment and add some color to your grilled menu with these 10 tips for summer veggies grilling.

1. Match the tools to the veggies

Large veggies, such as halved or whole bell peppers, eggplant, corn and zucchini steaks, and halved tomatoes can be grilled directly on the grate. It is recommended that you have a pair of long grilling tongs.

When you are grilling narrow veggies, such as broccolini and asparagus, a grill basket prevents the vegetables from falling through the gates while still allowing them to get smoky and charred.

2. Know your produce to prevent burning

Plan the grouping and timing of your veggies by their type. Vegetables, such as lettuces and cherry tomatoes only take a minute or two to grill while others, such as squashes, corn, and onions can take longer.

The densest vegetables, such as potatoes will take the longest to cook. In order to avoid the common mistake of charring on the outside with rawness on the inside, sear veggies over high heat and then transfer to a cooler zone of the grill to finish.

There are other techniques, too. One of them is to par-cook dense veggies and then give them several minutes on the grill for color and taste. This is the important step and for that reason know your produce in order to prevent burning.

3. To skewer or not to skewer?

Let’s talk about skewers for a second. They can be helpful when you are grilling smaller veggies which might fall through the grate of your grill. Skewers also make it easier to turn your vegetables.

Just imagine mushrooms on the grill. Would you just pick up and flip a single skewer with six mushrooms on it or rather turn them one at a time? The best skewer for grilling is stainless steel kabob skewer because it won’t roll and it is easy to flip.

Bamboo skewers will work, as well. However, make sure to soak them in water for about 30 minutes before putting them on the grill. If you don’t do so, they will turn black and possibly catch on fire.

Tossing the veggies with a good dose of high-heat oil adds flavor, promotes caramelization, and prevents them from sticking to the grill. It is important not to skip this step.

Add the veggies to a big mixing bowl with a glug or two of vegetable, rice bran oil, or grapeseed, a generous sprinkling of salt, and sturdy seasonings (if desired), such as red pepper flakes, black pepper, dried oregano, chopped thyme or rosemary, or crushed cumin seeds.

Save delicate seasonings, such as chopped leafy green herbs (such as cilantro or parsley), citrus zest, and citrus juice until after grilling. Toss the veggies to coat evenly. If threading the veggies onto skewers, this is the time to do it, since they are seasoned.

Some veggies do better if they are briefly cooked before being put on the grill. For example, precook firm vegetables, such as carrots and asparagus, for about 3 to 5 minutes in a saucepan of simmering water.

Otherwise, you will wait a long time for your meal. Proceed with seasoning and grilling when tender. There are also other veggies which do better if they are precooked. Make sure to do a small research on your veggies before you start grilling.

For faster, more even cooking, think of sizes and shapes which will expose more surface area to the grill. For example, cut onions, zucchini, and eggplant into rounds or strips rather than chunks.

Slice whatever vegetable you are working with into workable pieces. You want to aim for a size which is small enough to cook quickly, but big enough to keep from falling apart while cooking.

Cut corn into 2-inch pieces, slice tomatoes in half, slice yellows squash, zucchini, and eggplant into ¼-inch thick rounds or slices, trim the stems off of mushrooms and cut bell peppers into thick strips. Scallions and asparagus can go on the whole. Pay attention to the shape and size of the vegetable and decide for yourself what is the best way to cut it.

7. Grill veggies at the proper temperature

You probably ask yourself how hot should the grill be? A medium-high grill is best for most types of vegetables. This is about 400 to 425 degrees F if you have a gas grill.

However, if you are using a charcoal grill, the way to measure is to hold your hand 4 to 5 inches about the grill and count the seconds until you cannot hold it there any longer.

It can be gilding the lily, but feel free to dress your vegetables with a dash of balsamic vinegar or a tasty vinaigrette after grilling. If you season the grill, you will get more flavor.

One key that we also emphasize is to have a seasoned grill for flavor. Covering all of the grill with aluminum foil decreases the flavor of your food.

If you ask someone whether he or she ever had a “grill fail” with a vegetable or fruit, the only answer he or she could probably think of is a grapefruit idea. Other than that you probably won’t have a hard time even thinking of a vegetable which you cannot grill.

Grill until your veggies have caramelized in spots and are tender throughout. Don’t forget to flip them halfway through the cook time. Keep in mind that you should resist the urge to often rearrange the veggies as they won’t properly char.

For juicier veggies, such as tomatoes, this can take as little as a few minutes. Asparagus and broccolini should be cooked until al dente and bright green.

Both broccolini and asparagus overcook easily. Therefore, keep an eye on these two. Leafy greens, such as kale or halved romaine hearts should be cooked until they will turn mushy and bitter or just charred. Both kale and halved romaine hearts usually require as little as 30 seconds on each side.

Keep an eye on your vegetables since they are done so quickly. If you are planning to do something else, make sure to move your veggies up to the second part of the grill.

If you turn you back on them, it will end in a charred mess pretty quickly. If you are grilling something thin in shape, position the vegetable perpendicular to the grill lines or use a grill pan so that they do not slip through a space in the grill.

In order to prevent burning, grill veggies over indirect, moderate heat. Make sure to flip them often and move them to cooler parts of the grill as necessary. You can also steam veggies in foil packets rather than directly on the grill if you prefer a lower-maintenance method.