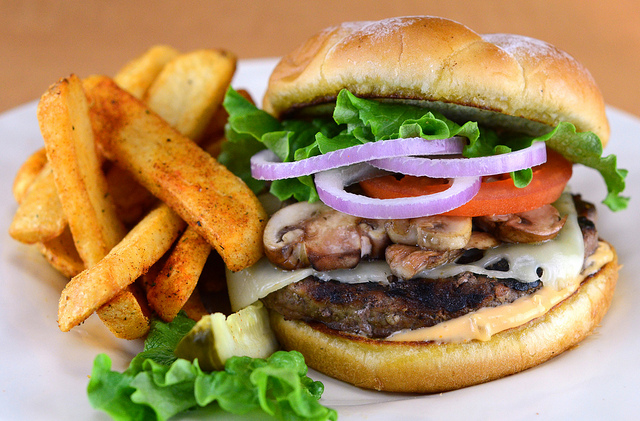 What is your favorite food? The one you tell to others you are addicted to. Burgers, cheese, coffee, or chocolate? All of us have our weaknesses.

However, can you actually be physically addicted to a food? Experts say yes. In fact, there are many studies which have shown that some foods actually have a narcotic-like effect on our brains.

Therefore, when you sometimes overdo it on cheesecake or fast food, remember that it is not just a lack of willpower on your part. It is a chemical reaction, too. What are the 5 most addictive foods? That is, of course, a matter of opinion. However, we think that many of these would make your list. Without further due, here is a list of 5 most addictive foods.

One study, which involved rats, has shown that when given unlimited access to unhealthy food, such as fast food, candy, and bacon, rats gained weight quickly. This is not surprising. However, it was interesting that rats continued to eat the junk food, even when they received an electric shock when they have eaten more than they were allowed. Even though this may not sound like you, it might not be a bad idea to think again when you go out for a fast food.

If you drink coffee, then you probably won’t argue that caffeine is actually addictive. The more caffeine you ingest, the more likely you will suffer withdrawal symptoms when that caffeine is taken away. However, we are not talking just about coffee. Caffeine can also be found in soda, chocolate, energy drinks and tea. Since caffeine is a mild stimulant, you feel more energized after consuming some.

However, if you skip your regular intake, you might feel sluggish or headachy. Why? Caffeine actually prevents headaches by blocking the receptors in the brain which dilate blood vessels, the cause of a headache. Pain relief products, such as aspirin, contain caffeine for that very reason. Caffeine withdrawal symptoms can begin as soon as twelve hours after your last cup of coffee, and they can last as long as a week.

Cheese. Cheese fries, Cheeseburgers, Cheese plates. Cheese lover’s pizza. Cheese curds. We have many delicious meals with cheese, and it is not pretty. According to one study, traces of morphine can be found in cow’s milk. Although it is definitely in tiny amounts, it is there.

Is seems that cows, as well as humans, can produce morphine in their bodies. Experts think it is in the milk to help a baby bond with its mother. Casein is another addictive ingredient which can be found in cheese. Casein is a protein which releases substances called casomorphins during digestion, which also has an opiate effect.

Beyond the allure of your favorite desserts, such as pies, cupcakes and ice cream, the sugar in just about any food can be addictive. Although it might be hard to believe, sugar addiction starts at birth. Human breast milk is pretty sweet, and even as babies we associate sweetness with satisfaction and happiness.

When sugar enters your bloodstream, your blood sugar levels rise and this causes the pancreas to release insulin. The released insulin converts the sugar into energy. However, excess insulin also encourages fat storage. Therefore, the more sugar you consume, the more insulin you produce and for that reason the more likely you are to gain weight.

There is a good reason why so many people call themselves chocoholics. When a person eats chocolate it releases serotonin into the brain. Serotonin affects the cells in the brain which are related to appetite, social behavior, mood and even sexual desire. Therefore, when we eat chocolate, we actually feel happier. Then, when we are not eating chocolate, we crave that feeling.