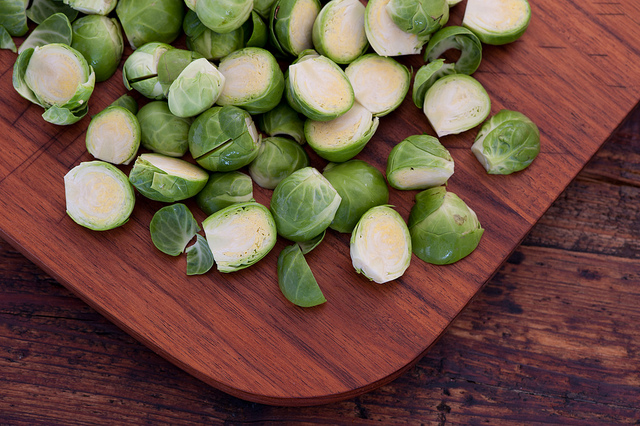 Brussels sprouts were first grown in Belgium in the late 16th century. In the middle of 19th century, they found their way to England and there gained huge popularity.

Even today, the Great Britain is number one consumer of Brussels sprouts. Americans grow 6 to 7 times fewer crops and it is mostly cultivated in New York and California. The peak season is from September to the middle of February, but you can find them almost year-round.

Brussels sprouts are a cool-weather vegetable and require three months to mature. Therefore, in order to harvest in the fall, it is best to plant in the summer. However, if you want to harvest in early summer, they can also be planted in early spring, one month before the last frost. Keep in mind that Brussels sprouts can be a difficult vegetable to grow if summer is very hot where you live.

You can buy transplants in order to save time because Brussels sprouts take so long to mature. Put them in a well-prepared, sunny bed, and leave 2 feet space between each. During planting feed them with a dilute solution of liquid fertilizer. Repeat the process about three weeks later. These grow, unlike any other crop, spiraling up the stalk.

Make sure that the heads mature at the same time by pinching the tip from the stalk one or two weeks in advance, if you intend to harvest all at once. If you want to harvest them individually, choose 1 to 2-inch sprouts as they mature from the bottom up, removing the leaves as you go up the stem. The best-tasting sprouts have 1 to 1 and a half inches in diameter.

They should be green, firm, and compact with minimal torn, yellowing leaves or nicks. The smaller the head, the sweeter the taste. Pick sprouts which are similar in size so they will cook evenly. Remove any loose or damaged outer leaves, and store Brussels sprouts in a produce bag and put them in the coldest part of the refrigerator. Try to cook them as soon as possible, even though they will last a couple of weeks.

After three or four days, their flavor will start to become unpleasantly strong. Remove any loose leaves, wash each Brussels sprout and pat dry. Now, make a shallow “X” in the sprouts by trimming the stem ends. This will allow the heat to go through more effectively and cook the vegetables more evenly. Tip: Throw a couple of pieces of red bell pepper or a stalk of celery in the cooking water, if your nose is particularly sensitive to the scent of cooking sprouts, but remember to remove before serving.

Brussels sprouts should be cooked until tender but still slightly crisp, for about 10 minutes. The color should be intense. Olive-drab sprouts are overcooked. Pierce the stem end with a fork (it should penetrate easily) in order to check doneness. Brussels sprouts, just like other cruciferous vegetables, are full of natural plant compounds, such as phytonutrients.

This compound can protect against cancer. However, Brussels sprouts are also a great source of fiber (which aids in digestion and lowers cholesterol), iron (which is necessary for maintaining red blood cell count), folate (which is necessary for normal tissue growth and can protect against birth defects, heart disease, and cancer), potassium (which lowers blood pressure and maybe even cholesterol), and vitamins A and C (which fight against cataracts, cancer, and heart disease).