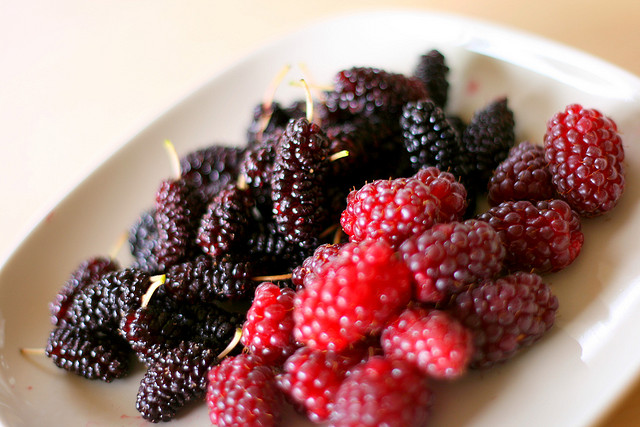 Mulberries grow on trees rather than the bush. The trees grow fast and produce large amounts of berries each season. Mulberries have several colors, from a deep dark red to white.

The white variety is the superfood and is sold in health food stores. The leaves of this white variety are used as food for silkworms.

Mulberries are a great source of raw food protein, which is a rarity in the fruit kingdom. These berries are also a great source of fiber, vitamin C, calcium, iron, riboflavin, potassium, and magnesium. High concentration of resveratrol is one of the greatest health assets of mulberries, which is an antioxidant currently being studied for its effects on heart health. Mulberries are the ancient fruit of Asia. They are used as a remedy for tapeworm, arthritis, insomnia, and ringworm.

In case you live in a warm climate and have mulberry trees you, you can enjoy them fresh off the tree. When they are fresh, mulberries are most delicious. However, sometimes they grow in such abundance that you will have to find other uses for mulberries since they will only keep for several days after picking.

Mulberry wine, cobbler, dessert sauces, pancakes, smoothies, freezing for later use, jellies and jam are most common uses for mulberries. Dried mulberries, which you can find in stores, go great in granola, oatmeal, trail mix, and smoothies.

Black mulberries are more tasty and flavorful than their fellow red and white varieties. Their peak season is May-August, while the latter two varieties can be readily available until late spring. Mulberries spoil rather quickly and for that reason, you should preserve them in a zip pouch unwashed and put inside fridge where they stay fresh for up to a few days.

In order to eat them, wash the berries in cold water in a bowl instead of in running water. This way you won’t injury them. By doing this, you will also bring the berries to room temperature and enhance their taste and flavor.

Mulberries are low in calories, with just 43 calories per 100 grams. They are composed of health-promoting phytonutrient compounds, such as minerals, vitamins, and polyphenol pigment antioxidants which are essential for good health. Mulberries contain high amounts of phenolic flavonoid phytochemicals called anthocyanins.

One study has shown that mulberries have potential health effects against aging, inflammation, neurological diseases, cancer, bacterial infections, and diabetes. Mulberries are a great source of vitamin C, which is also a powerful natural antioxidant. Consumption of mulberries helps against counter inflammation, infectious agents, and scavenge harmful free radicals.

The berries are a great source of iron, which is a rare feature among other berries. Being a component of hemoglobin inside the red blood cells, iron determines the oxygen-carrying capacity of the blood. They are also a great source of minerals, such as magnesium, manganese, and potassium. Potassium is an important component of body fluids and cells, which helps controlling blood pressure and heart rate.

Manganese is used by our bodies as a co-factor for the antioxidant enzyme, superoxide dismutase. Mulberries are rich in a B-complex group of vitamins and vitamin K. They contain great amounts of vitamin B-6, such as folic acid, riboflavin, and niacin. These vitamins help the body in the metabolism of fats, protein, and carbohydrates.