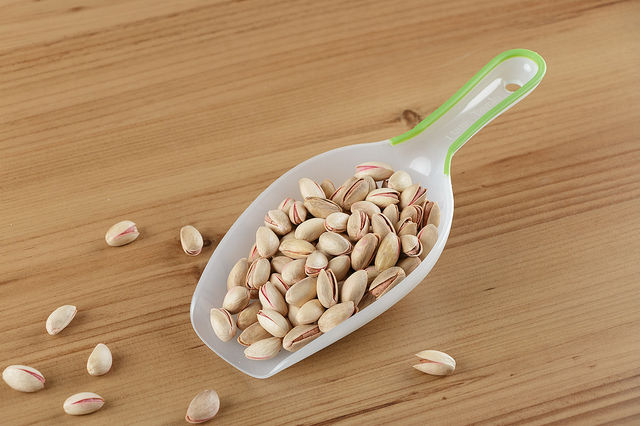 The pistachio has been known for thousands of years throughout the Mediterranean, but it originally came from Asia.

It has been cultivated in New Mexico, the English-speaking world in Australia and in California where the pistachio was introduced in the middle of 1800s as a garden tree. The pistachio contains a lot of protein and antioxidants and it also assists in lowering your cholesterol levels.

The season of pistachio is late summer and early fall. Pistachios can be eaten alone as a healthy snack or they can be used in a recipe for the early fall season. After only a short period of regular consumption, pistachios have been shown to increase the good HDL cholesterol and reduce the bad LDL cholesterol. Type 2 diabetes may also be prevented by eating pistachios. They also have two carotenoids (lutein and zeaxanthin) which cannot be found in many nuts.

These two carotenoids act as protective antioxidants which defending tissues from damage from free radicals. In addition, lutein and zeaxanthin also protect your eyes. Pistachios are also a good source of vitamin E, which is great for protecting your skin from UV damage. The consumption of pistachios is skyrocketing in the world. Chefs are using pistachios in even more recipes and it seems that pistachios are enjoying their moment in the sun.

The United States are the leaders in the world of their production. Since 2010, Iran was passed by the United States, which was a big producer of pistachios. The stocks for export increased from 45 to 122 million in the last 6 years and the sale is growing. Pistachios have fewer calories in comparison to any other nuts. They also have more calcium than other nuts, which as a result can reduce the levels of a stress hormone called cortisol.

People who consume pistachios can reduce the risk of cancer and the level of cholesterol. Pistachios are also a great source of phytosterol, which is natural compound full of antioxidants that reduce the levels of bad LDL cholesterol. There are no red pistachios in nature. They are colored in red and green by the importers in order to cover the stains which occur during the traditional harvest. This is all fascinating.

However, we think that the flavor of pistachios is the one thing we love the most about them. For that reason, they can be used as supplements in many meals. We also love many savory and sweet recipes which make great use of one of our favorite nuts.