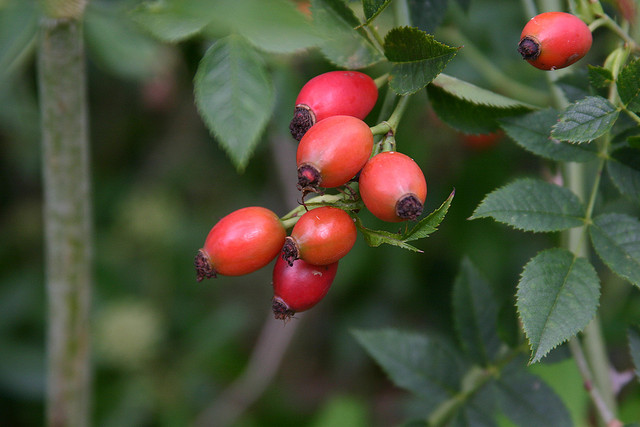 Rosehips are the fruit of the rose plant. They normally form in late summer and autumn, after the plant has been pollinated. Many people forget about roses once the rosebud falls off. However, the fruit of the rose plant is yet to come. Although the color is typically red, it can also be black, purple, or orange. They are some of the most nutritionally packed fruits, which is the reason why they became such a desirable and sought after product in many markets in the world.

They have been cultivated for many reasons, even as decoration due to their color and shape. However, it wasn’t until recent decades that the medicinal value was discovered. The number of ways that they can be prepared is impressive. Marmalade, pies, wine, bread, tisanes, soups, jellies and jams are some of the most common forms of rosehips. Rosehips are very versatile ingredient which is enjoyed by many people around the world, whether due to its nutritional benefits or for its delicious flavor.

Many people around the world want their skin to look more youthful, blemish-free, and beautiful. There are a lot of potential treatments and products for tightening and toning the skin, but rosehips are one of the best solutions. Their astringent quality keeps the skin elastic, so it doesn’t develop wrinkles, burns and scars are quickly healed, flaws easily eliminated, and the skin generally looks more vibrant and younger.

Rosehips are good at strict regulation of the blood sugar levels, which is very important for people who suffer from diabetes. Rosehips can prevent the plunges and spikes in blood sugar, by keeping the balance of glucose and insulin in your body.

Pectin and many other acids within rosehips are known to induce excretion and urination. Rosehips can eliminate toxins from your body, as well as excess liquids, salts, and even fat. They can also help a person to avoid any kind of unfortunate health discomforts and conditions by stimulating the bowel movement.

Rosehips are a good source of iron, which is an important component in the creation of red blood cells. For that reason, by using an adequate amount of rosehips in your diet, you can prevent anemia and also keep your essential organs oxygenated.

Rosehips contain some of the antioxidant components and organic compounds which reduce the cholesterol content in your body. As a result, this reduces strain on your cardiovascular system and also lowers your chances of suffering a heart attack or a stroke.