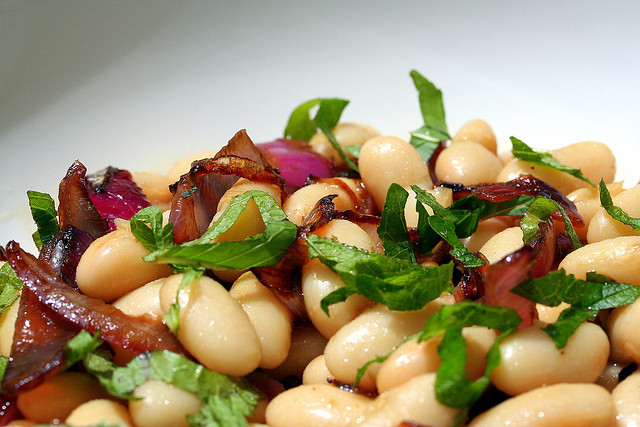 The body uses carbohydrate as its primary energy source. However, it is important to provide the body with only as much energy as it requires. Otherwise, the extra carbohydrate accumulates as fat in body cells. Check out the following list of top 7 high carb veggies to plan your diet effectively.

Potato products are among the riches in carbohydrate content. This is the reason why children who eat potato chips and fries too much often become obese.

Childhood obesity is as much of a big problem as adult obesity is. Getting to the numbers, mashed and boiled sweet potato (without the skin) consists of 8.2 gm of fibers and 58.1 gm of carbs per cup.

Dietitians recommend cooked and dried beans as a good source of vegetable protein. While it is true, they are also great sources of carbohydrates to the body.

All members of the legumes family display very good carb content. A cup of navy beans (canned) has a carb content of 53.6 gm and 13.4 gm in fiber.

The legume family also consists of peas high in carbohydrate content. Green peas deliver 12 % of carbohydrate in only a half cup, when measured uncooked.

Black eyed peas are carbohydrate giants with 22 % carbohydrate in only half cup serving.The chickpeas are no less than their other family members are; with a heavy dose of 45% carbohydrates in a single cup measure.

Legumes and potatoes are starchy vegetables, and they are quite heavy foods. However, in comparison, you should prefer the legumes potatoes because they do not supply protein to your body.

Corn is a commonly consumed vegetable. It is also a major source of carbohydrates to the body. One cup of boiled corn can provide 36.8 gm of carbs and fibers 3.5 gm. Corn is perhaps the most ancient vegetables. Archeological records indicate the ancient Mexicans were the first to discover the agriculture of corn, more than 7000 years ago.

God, maize is older than Jesus Christ even! Besides the significant carbohydrate content, corn is also a rich source of several other nutrients such as vitamin C, thiamin, phosphorus, foliate, and magnesium.

This vegetable is also greatly high in carbohydrate content. The amount of carb available per serving depends on the type of squash and the cooking method.

You get a heavy dose of 29.9 gm of carbs and fiber 9 gm with one cup of baked acorn squash. The numbers are 22.2 gm for baked Hubbard squash.

The fiber content is 10 gm per cup. Baked butternut squash has a carb content of 21.5 gm and 6.6 gm fibers. Although it is not a very common vegetable, it can help you create a fulfilling meal with only a small amount.

This food group is an excellently high source of dietary fibers and carbohydrates.

Each whole grain is rich in complex carbohydrates along with a layer of endosperm providing nutrition to the body.

Apart from the six vegetables mentioned above, several other are good in carb content. Sweet vegetables such as carrot and beetroot are high in carbs. Carrot has 8 gm carbohydrate in every 100 gm of serving.

You need to plan your diet in a balanced amount so that at least 30% of it consists of carbohydrate content. Do not exceed the amount unless you are exercising daily. Otherwise, the extra carb just stores up as fat in body cells.