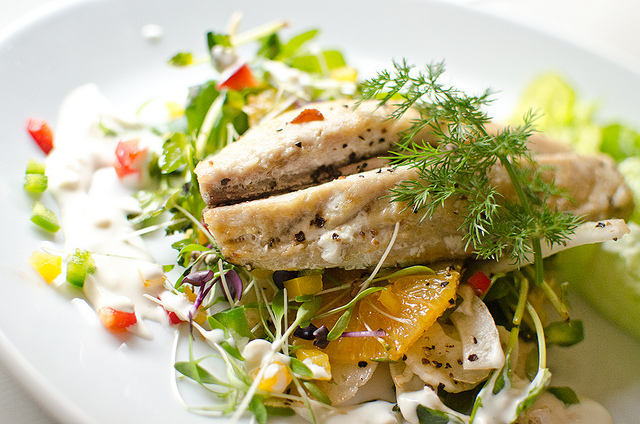 The Nordic diet is designed by the chefs Claus Meyer and René Redzepi in Copenhagen, at their world-famous restaurant named Noma. This diet is rich in traditional Scandinavian foods such as fish, berries, and whole grains.

The two chefs created this diet in 2004, when they discussed Denmark’s reliance on mass-produced meat and additives, processed food, and pledged their allegiance to a style of food that expresses the simplicity, freshness, purity, and ethics associated with the region.

In 2005, The Nordic Council of Ministers gave their seal of approval for this diet. They also issued guidelines which included eating wild meats and foraged plants wherever possible, eating whole grains such as spelt and rye, eating more seafood, and eating plenty of leafy greens, nuts, berries and root vegetables. The diet also includes canola, a cold, pressed rapeseed oil, which has less saturated fat than olive oil.

Canola oil – Rapeseed oil, which is better known as canola oil, is the main cooking oil in Denmark and region. Canola oil is used in the Nordic countries as an alternative to olive which is preferred in the Mediterranean diet. Even though both oils are high in unsaturated fats, canola oil has more than 50% in butter, and just 6% saturated fat content, compared with olive oil, which has 14%. In addition, canola oil is rich with vitamin E.

Whole grains – Bread, which is made of whole grain rye, low in sodium are advocated. According to studies on whole grains, it has been discovered a significant association between intake of whole grains and risk of type 2 diabetes, cancer, cardiovascular disease, the risk of obesity, and weight gain.

Berries – Blueberries, cloudberries, elderberries, wild strawberries, lingonberries, red and black currants are an integral part of Nordic Diet. Nordic countries usually use berries to meat and fish dishes, use them in desserts, and eat it as a fruit. All these berries are rich in antioxidants which protect against cancers, strokes, heart disease, and other diseases caused by free radicals.

Meat – Elk and reindeer are native animals of Nordic region. The meat of any game animal killed by hunting, especially deer – Venison – is the meat which is preferred in the Nordic Diet. This can be hard to get in Asian countries, but instead, you can opt for organic substitutes.

Low-temperature cooking methods, like oven boiling and baking, are important preparations methods which are recommended in this diet in order to keep nutritional value of the foods. The Nordic Diet emphasizes the quality of carbohydrate and fat, refined cereals versus whole grain cereals, quality, amount and source of dietary fiber, and the theory of Glycemic Index, which helps with weight loss in overweight people and reduces the risk of metabolic syndrome.

New Nordic Diet secures foods without jeopardizing the environment by focusing on foods from organic sources, minimizing waste and utilizing all the food purchased, locally grown foods to minimize the negative impact of transportation on the environment, food sourced from the wild countryside, minimizing the use of fertilizers and pesticides and encouraging biodiversity.

The Nordic Diet is mainly a plant-based diet and it is favorable for vegetarians who seek to reduce weight or improve their health. In this diet, animal products are usually used as side dishes. It is recommended to eat cereals like rye because they have slow-digesting fiber, which prevents rises in blood sugar.