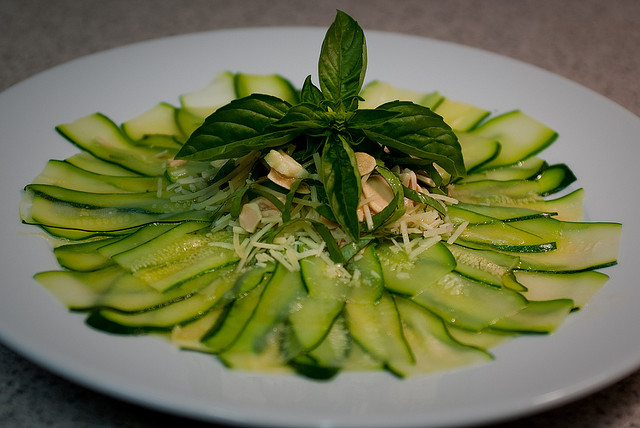 During the summer, when the temperature soars and fresh products are juicy, crisp and at it’s best, these healthy no-cook lunch recipes will help you prepare fresh, fast, and delicious meals and snacks in just minutes.

However, even though several recipes from the list require no cooking, some of them call for a quick zap in the microwave.

Drain a can of tuna or a jar. Flake into a bowl and toss with chopped basil, toasted pine nuts, and capers. Season with a pinch of black pepper and salt and drizzle with olive oil. First, hollow out a tomato and then use tuna salad to fill it. Use additional basil in order to garnish it.

Slice the kernels from a cob of sweet corn. Then, prepare whole wheat pasta. Before it’s done add corn and cook for about 20 seconds. Drain corn and pasta and put it under cold water for a few seconds. Drain very well. Put arugula in a large salad bowl and add corn and pasta. Coat lightly with a drizzle of balsamic vinegar and olive oil. Season with pepper and salt, and toss it well. Over the top crumble some blue cheese.

3. Hummus with red onion in a whole wheat pita and roasted peppers

Combine a clove or two of minced garlic, olive oil, tahini, fresh lemon juice, a pinch of cayenne, salt, and pepper, and a pinch of cumin with rinsed canned chickpeas in a blender, and puree until smooth. Also, you can skip this step and use your favorite hummus. Put the hummus in a whole wheat pita layered with sliced cucumbers, thinly sliced red onions, and roasted red peppers.

According to package instructions, prepare whole wheat couscous. Cut a wedge of seedless watermelon into small chunks and peel and thinly slice a cucumber. Toss the watermelon, cucumber, and couscous in a bowl. Throw in some slices of scallion, crumbled feta, and torn mint leaves. Whisk together four parts olive oil and one part red-wine vinegar and fold into the mixture before you serve it. Season with pepper and salt.

5. Parsley salad and tabbouleh with pecans and cantaloupe

According to package directions, prepare tabbouleh. First, wash, dry, and mince a lot of parsley and then stir it into tabbouleh along with olive oil, salt, lemon juice, a pinch of cayenne, and chopped red onion. Gently mix in chopped pecans and cubed cantaloupe.

6. Greek garlic-cucumber-yogurt sauce on the top of egg “shooters”

Peel and chop a cucumber, and then stir it into a Greek yogurt. Add some chopped fresh dill, a minced garlic clove, and pepper and salt to taste. Peel well-cooked eggs and slice them to half lengthwise. Put egg halves on a platter and add yogurt mixture over the top. If you desire, you can garnish with sliced olives.

Chop nicely a shallot and whisk with three parts olive oil and one part lime juice. Put cooked shrimp into a bowl and add sliced orange segments. Toss it all with vinaigrette. Season with black pepper and salt. Place sliced radicchio in a cocktail glass and add shrimp mixture over it.

Trim several zucchinis and then slice them lengthwise into strips with a vegetable peeler. Put zucchini ribbons on a plate and add scatter chopped pitted olives on the top. Drizzle with fresh lemon juice and oil. Season with black pepper and salt. Also, add shaved Parmesan on the top.

First, slice prosciutto into the quarter-inch strips. Whisk together one part olive oil and two parts orange juice in a bowl and season it with a pinch of pepper and salt. Then, drizzle it with balsamic vinegar. Toss together chopped pecans, dried cherries, prosciutto, and baby spinach leaves in a large bowl. Add enough vinaigrette just to coat the greens.

Cube toasted corn bread and cut several ripe tomatoes into chunks. Combine with chopped cilantro, grated jalapeno jack cheese, and rinsed canned black beans. Whisk together salt, pepper, fresh lime juice, and a pinch of cumin. Pour juice mixture over the top of cubed avocado. Then, mix it gently into the Panzanella and drizzle it with olive oil.