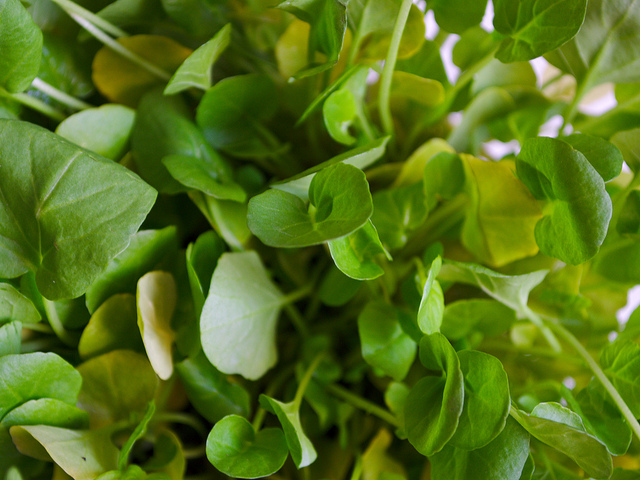 Watercress is a leafy, dark green which grows in slow-running natural spring water in Asia, America and Europe. It is a part of the cruciferous family of vegetables along with Brussels sprouts, arugula, broccoli, and kale.

Watercress is characterized by its round, small leaves, with a sharp, bitter flavor. The Corymb is a small white flower which appears in the flat cluster.

The tender, fresh leaves have to be harvested just before flowering because after flowering the leaves become bitter and are no longer good to eat. Watercress has a lot of uses, either as a medicinal herb or as a flavoring herb. It can also be added to other vegetable juices in order to give them health benefits and flavor.

According to a study, vitamin E along with vitamin C is effective in reducing oxidative damage to red blood cells. Although this study was based on supplements, it also suggested that consumption of foods such as watercress can be beneficial to health, since this food also contains the same nutrients.

One study in Europe has suggested that vitamin C can be effective in reducing the development of cataract. Adding watercress, which has a high amount of vitamin C, can be beneficial in protecting against cataract.

Foods which are high in vitamin C are effective remedies against a common cold. According to studies, people who consume food rich in vitamin C can reduce the risk of the cold by about 70%. Watercress is an excellent source of vitamin C and its consumption can help in reducing the risk of cold.

Watercress contains folate, which is an essential nutrient that has a role in a daily health maintenance and in preventing birth defects. Alcohol consumption can affect the folate levels. The consumption of foods which are rich in folates, such as watercress and other cruciferous vegetables, can work as a preventive and even to resolve some health conditions, such as stroke, cognitive decline, the risk of depression, colorectal cancer, osteoporosis, breast cancer and neural tube deficiency in babies.

Although the studies have mixed results, a lot of people have concluded that the diet rich in folate can prevent colorectal cancer. The benefit of folate was seen more often when it was consumed for 15 years or even more.

Just like other members of the brassica family of cruciferous vegetable, watercress has shown benefits in thyroid health. It can reduce thyroid hormone production and has most benefits when eaten raw.

Watercress contains a lot of secondary metabolites which can lower risk of many chronic diseases. Just like other cruciferous plants, watercress helps in lowering LDL cholesterol (“bad” cholesterol) which reduces the risk of arteriosclerosis, other cardiovascular diseases as well as chronic heart disease.

Studies have shown that food rich in calcium, such as watercress, can reduce the risk of osteoporosis. Calcium repairs and builds bone by affecting the production of osteoblasts, the cells which are responsible for this beneficial activity. This benefit of calcium is important for older people, though the younger population can also benefit if they have bone density loss.