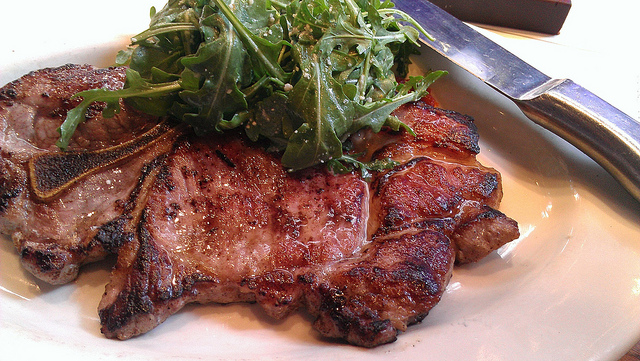 The very popular Paleo diet is returning to what is best of life in the primitive world!

Queries on Paleo diet topped Google search in weight loss categories in 2013. The uniqueness of this diet is catching up fast!

The main idea here is to assume a primitive diet, the best parts of it, and get rid of all conventional calories. Apparently, the basic motto of this diet is to be as far as possible from the modern age of McDonalds.

It says, go to the forests, eat basic vegetables (not farm produce), and allow for an increased proportion of animal protein. Is it for you? Look up all info on Paleo Diet here to find if it is! Do remember that it should not consist exclusively of food, but also exercise. The ancient hunter gatherers were obviously very physically active.

2. Packaged food is not allowed

It should be an obvious interpretation that packaged foods are only a recent invention! In a Paleo diet, you are thinking about millions of years ago.

A few of the dinosaurs who eventually ended up as the plastics of packaged foods (plastic is a fossil fuel product) were probably still alive when people were enjoying the Paleo diet!

It is actually easy to avoid packaged foods if you want to do that. All it takes is to avoid processed marketing! You can always buy fresh fruits and vegetables instead of spending money on sugar rich packaged fruits. The choice is always there. All you need is the motivation to improve your health.

3. Grains are not on the menu

This is one of the key aspects of a Paleo diet. The logical premise is based on the fact that the hunter gatherers did not even invent farming!

This is actually a very good way to keep GMO based pulses out of your diet. These grains are genetically engineered with alien DNAs to keep the pollinating insects away by default.

In fact, there is a particular variety of corn that bursts the stomach of a bee even if it takes a bite on it. It surely does not sound safe to ingest that corn! Besides, these grains are also laden with pesticides. You can always buy organic farm produced food instead!

4. Only issue is that it’s high in protein

The only issue with a Paleo diet is that it is highly dependent on animal protein. Essentially, it all comes down to the person who is dieting.

One must always remember that dieting systems must always be customized. Diet conditions vary uniquely. If overeating is your problem, then eating a lot of meat is not going to be a healthy solution.

In fact, most meat products are rich in trans-fats. Bacon or swine meat is the unhealthiest of all. Do you know that pigs eat everything from their own feces, corpses, rotting vegetables, sick maggot infested things, human waste, virtually everything! All these assimilate in the pig’s body as it does not have sweat glands. If you do not stay away from bacon, health is hell!

5. Meat may or may not be a priority

Why is it natural to assume that all hunter gatherers feasted on meat every day? Many animals are completely herbivorous. Heck, even some dinosaurs were herbivores!

Why can’t a band of first men and women prefer fruits and roots over animals? Why is so unnatural to assume that primitive men were intelligent! Look at the cave paintings! The colors they have used remained there for thousands of years now!

The paintings are cool as well. It is actually a little unscientific to assume that hunter gatherers were thoughtless brutes roasting on meat day and night! Look at the details. Your food habits depend on your personal uniqueness. You are what you eat.

Sugary drinks and food pack in the most calories. Besides, soft drinks always have this high concentration of preservatives and chemicals that are not good for the body.

The fruit juice packed in box has all its nutritional qualities neutralized by chemicals. How can a fruit juice be ‘fruit juice’ if it has a shelf life of six months? Can you juice a fruit and keep it intact for six months? Get real.

When you need juicing, you can easily juice any fruit from your kitchen. The cavemen may not have known agriculture, but fruits like apples always grew abundantly on trees! After all, the Bible relates an Apple Tree in the Garden of Eden! Isn’t that ancient?

Do keep in mind that the cavemen were hunter gatherers. One fine morning the first man did not wake up and walk to the shop to buy meat!

He had prepared his arrows by making a stone hammer. He has made himself a fine spear. He has taken time to track the movement of the wild boar on the run. Many days have even gone futile maybe.

Then one day, he impaled that boar and brought it home as an offering to the fire God maybe! The point is that a lot of physical exercise is included in a Paleo diet. Please, there is absolutely no shortcut to losing weight! You will have to burn those calories by certain amount of exercise.

Since Paleo is mainly a meat based diet, many dieters choose this simply because of their animal protein addiction.

When you are always going gaga over meat, meat, meat, the aesthetic appreciation of dishes gets neglected.

Come on now, the garnishing part is also important. When it looks good, it feels really good, and it doesn’t just satisfy your hunger.

When you forsake the traditions of neat dining, you are totally missing the point. All culinary traditions of the world have importance on table. There is always a healthy reason for that. When you are graceful, you just don’t stuff yourself! Instead, you are eating only as much as you need, but in full satisfaction. Bon appétit!

9. Dairy is in balance

The cave men were hunter gatherers first and cattle herders next. At some point of time, they were both. One of the brothers went to the forests to hunt a wild boar while the other brothers herded the cattle.

So, you will need to balance both these aspects to follow your Paleo diet. However, most of the packaged dairy products are laden with antibiotics and other preservatives.

Multiple pasteurizations also ruin the nutritional value of the milk. So, it is not a healthy choice in that sense. In addition, packaged milk suppliers are heavily accused with inhumane animal cruelty. See if you can find fresh goat milk, buffalo milk, or cow milk. It may not be that difficult to find online.