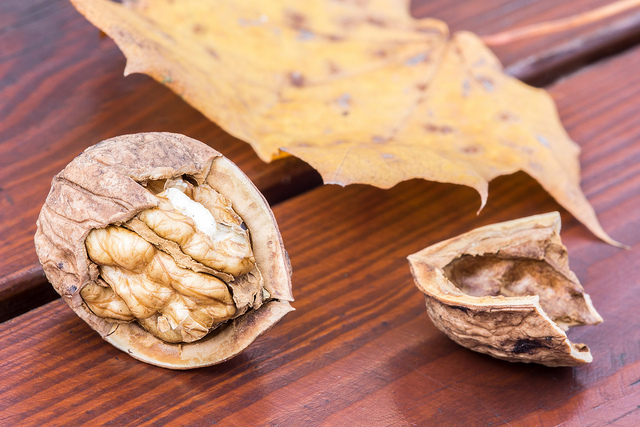 Walnut is a seed which is edible and it grows on the tree nut Juglans regia. This plant originated in India and the regions which are surrounding the Caspian Sea.

However, the ancient Romans introduced the walnut to a lot of European countries in the 4th century AD. The tree has a multitude of uses.

It can be sued as medicine, dye, furniture and food. Walnuts have a lot of health benefits, such as slowing or preventing various cancers and weight management.

According to a study, eating about 30 walnut halves a day provides phytosterols and antioxidants which can help reduce the risk of breast cancer. Mice were fed with two ounces of walnuts, which is equivalent to humans. People who ate walnuts had significantly decreased breast tumor incidence and its growth rate, compared to mice.

According to a study, walnuts contain higher quality antioxidants and a lot of healthful antioxidants than any other nut.

4. Walnuts can help you deal with stress

The consumption of walnuts has a lot of health benefits and one of them improves the metabolism in our bodies. Walnuts provide minerals to our bodies. Minerals such as copper, calcium, potassium, manganese, selenium, zinc, magnesium, and iron are provided by walnuts. The minerals contribute to metabolic activities such as sperm generation, development and growth, nucleic acid synthesis, and digestion.

The amount of carbohydrate, calories, and fat content found in one ounce of walnuts is about 4 grams, 190 calories, and 18 grams. For that reason, it is believed that the consumption of walnuts can result in weight gain. However, one study has shown that people who ate about 35 grams of walnuts a day didn’t gain any significant weight over a period of one year.

7. Walnuts improve the health of bones

Walnuts contain EFAs, which secure the health of bones in our bodies. EFAs increase the absorption and deposition of calcium while reducing urinary excretion of calcium.

8. Walnuts can reduce the risk of diabetes

One study has shown that women who ate one ounce of nuts at least 5 times a week reduced their risk of type 2 diabetes by roughly 30%, compared to those who never or rarely ate nuts. The polyunsaturated and monounsaturated fats in nuts are great for insulin sensitivity.